I may not be on my blog, but I'm on Instagram!

Hiya!
I think I changed my mind about 15 times before finally settling on a Valentine handout for my son to give to his friends. There were so many terrific ideas out on the web.... Just when I thought I had it figured out, I would see something else that would turn me another direction.

The inspiration for this Valentine's "card" came from Betsy Veldman. While I was trying to think of something fun to give that might not be candy I happened by the Valentines card area at the store the other day and noticed there were just as many card kits being sold with pencils as those without. I think as long as I'm not handing out toothbrushes the kids will think it's cool, right?

The cute little man in the roadster came from WaltzingMouse's Half Pint Heroes. I colored him up with my Copics, black  Sharpie for the tires, and silver Sharpie for the hubcaps and details. 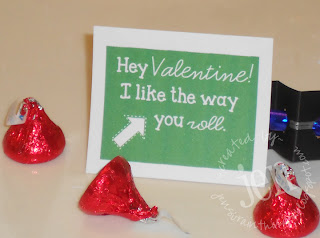 Then, to add the "sentiment" I created this road sign...

The road was made using a strip of black card stock. I drew the lane lines on using the silver Sharpie. After scoring and fan-folding the strips, I punched the holes for the pencils to slip through using my Crop-o-dile.  One hole was not big enough... I made four holes in a quatrefoil shape. 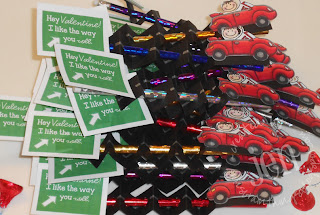 All in all, I think I paid about $2.25 to create them all (two packages of pencils, four pages of white cardstock, three pages of black cardstock.) And they were a piece-of-cake to make. I was able to easily make them over the weekend so he's ready to go on Wednesday.
Hope you are having a terrific day. Thanks for visiting.
Toodles......
Posted by Jen at 11:05 AM

Thank you for taking the time to comment. I really appreciate it!! 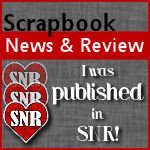